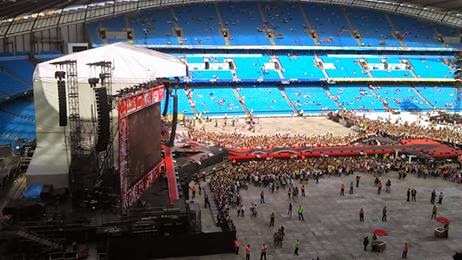 Life as a writer can sometimes be compared to a music artist preparing for a concert in a huge arena. The excitement and anticipation is overwhelming and you're sure you've done everything humanely possible to prepare. You've spent months if not years dreaming about this event and now you can't believe it's here.

You're not sure just how many tickets have sold but you hope it's been a sell out. You have everything crossed that the audience will love your debut song because it's just the best song ever! And you're almost ready to swear on your life that this concert will launch your career into places like Hollywood with cute chicks, cool cars and fluffy dogs.

The only thing this concert is responsible for is sending you to the edge of madness and complete insanity.

Five minutes before you're due to sing you find out that only a handful of ticket have sold. That's just a handful of tickets in one of the largest indoor arenas in the European Union. And most of those have gone to your family members.

Your world has suddenly flipped one eighty. Instead of looking forward to all these dreams and fantasies, you're suddenly trapped in some kind of nightmare.

But as a true and committed artist, you go out and perform anyway. You sing your little heart out because you know you have talent. You know you have what it takes to become a success someday. You're a star because you have endless amounts of perseverance, patience and a work ethic which is second to none.

The only problem is the rest of the world doesn't know it yet.

But that's your job, you see. Your job is to go out there one person at a time and make them see how great you actually are. And this obviously takes time. Very, very rarely do people become overnight successes and those people who do still run the risk of fading into obscurity one day. Just like the rest of us, no one is immune from that potential danger.

Whether you're a writer or a pop star, you will do whatever it takes to get yourself noticed because this is your life. It's the sole purpose of why you exist in the first place. And whether you are a writer who has only managed to sell a handful of books that really doesn't matter because as time goes on you will sell more. You'll sell more because you'll write more and with every day that passes you'll find new opportunities to take advantage of.

I am a writer and last week I took advantage of KDP Select. Select, as most of you know, belongs to Amazon and it seems they do great things to promote you.

I enrolled my chick lit book: A Step Too Far in Select last month and promoted it as free for forty-eight hours. Within this time almost 5,000 copies were downloaded. Most of these downloads took place in America with the U.K. coming in second. I had downloads in Europe, India and Australia. The only place where I'm still obscure is Japan, Brazil and Mexico.

So I'd say my little experiment was quite successful. The only downside of being free is negative reviews so I have my fingers crossed I don't get too many of those.

I'll probably run a similar experiment with Confessions of a Webcam Model once it's been out a while. So when the time comes round, I'll let you know how that book performs.